Estadio Sin Aqua and other memories of Seville

As the Sombreros get parked on stuffed donkeys in blue-themed man caves across the globe, and many try to figure out how to frame a screenshot of their new fancy e-ticket into a display with their “Seville 22” tops, we can’t help but look back at memories of a trip that we couldn’t dare dream of a decade ago.

Even after the first two group games of this season’s Europa League it seemed impossible and only the most confident or crazy could be heard singing “How will we get there? I don’t know”. But we got there somehow.

Those of a certain pedigree headed to Manchester 14 years ago thinking it was our generation’s once in a lifetime chance to sample a European final. Through the despair of 2012 not many would have tipped us to be in one again within a decade. Unlike Manchester, where getting to the final seemed like the pinnacle to many, the belief that we could win the thing this time appeared to be the near universal feeling. For a team that didn’t properly recruit for a tilt at the Champions League last summer, lost its manager mid-season, lost its first two groups stage fixtures and didn’t strengthen in the January window, we didn’t fare high in the bookies’ list of contenders but by beating both Dortmund and Leipzig along the way many felt Frankfurt could be dispatched at ease. Sadly, it didn’t turn out that way.

We were spectacular and swashbuckling in almost every knockout game but apart for a few glimpses, we failed to reach those heights in the sweltering heat of Andalusia’s capital. Big Joe did however give us hope and made us dream as he caressed the ball into the net in the 57th minute. The Palace of Zero Water erupted and the bears went berserk. Many grown men were in tears as the pain of the last ten years was erased by a side footer hitting the back of the Germans’ net. The equaliser 12 minutes later only temporarily deflated our faith. The majority still believed we could do this. As the game reached 90 minutes and extra time passed, we still believed it could be done. Our penalty takers looked good enough and many felt McGregor would surely save at least one.

The margins were tight. But for a moment of hesitancy at a cross, a little composure form Kent, an inch further into the post from one of their pens and their goalie’s studs at one of ours, it could have been so different. We didn’t need all those details to go our way, just one of them could have seen us victorious. But it wasn’t to be.

During many weekends of our wilderness years, you could hear bears explain, “It was a great trip bar the football” as we travelled to some of Scotland’s most secluded fishing villages on away days. Seville was different. Despite not being at our best the fans weren’t bemoaning our players as we trudged out the world’s driest arena and took the first steps home after zig zagging the continent to get there. Even those who did moan about Ramsey’s penalty or Goldson’s hesitancy at the goal were in the minority and would often be replied to with a “Shut up dafty and geez another beer” as their friends didn’t appear interested in complaining about losing a Euro final to the smallest possible margin.

We were gutted, proud, exhausted and dehydrated in equal measure. Isn’t it amazing how successful a day it was when we visited a city that was prepared for an avalanche of blue noses? Bar a few incidents (have I referred to the lack of water in the stadium?) the day was superb. The fan areas appeared adequate, the transport network wasn’t closed, and the TVs worked. The city’s mayor and many others praised the Rangers fans and it’s a tribute to them that not one single arrest happened in Seville. To get such a number to one city and not have a single misdemeanour is outstanding. The city was good to Rangers fans and the Rangers fans were good to the city.

The trip was fantastic, friendships were made, renewed and strengthened as fans met in airports across the globe and partied in bars, tavernas and cafes across Europe on their journeys to Seville. Hearing everyone’s crazy travel plans was a legal requirement when fans bumped into their friends. If Air Miles were still a thing, a few families would be going to Florida this summer free of charge.

It will be near impossible to think back in years to come and not have your memories accompanied with a soundtrack of “silky Scouser” or “I’m feeling it” ring around our heads. Social media was awash with videos of crammed bars and airports around the world showing fans enroute, belting out some of our new anthems. For days leading up to the final our timelines were packed with jubilance. Fans from around the world heading for the Iberian Peninsula and meeting merry travellers on the same pilgrimage. They sang, they hugged, they drank, they partied. We all met friends we hadn’t seen for a while from all different times in our lives and we shared a common belief and goal as we journeyed on together to the match.

Despite the hopes of many, there was no “Battle of Seville” headlines, the disappointment of the result was handled with dignity in a city that made us welcome and accommodated our numbers.

Seeing Rangers fans travel to the stadium in tourist horse-drawn carriages while belting out some fan classics will be a memory that will always make me chuckle. The absolute mayhem that followed Aribo’s goal will never leave me.

Can we just have some more water the next time please? 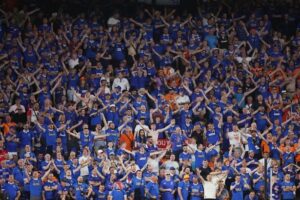